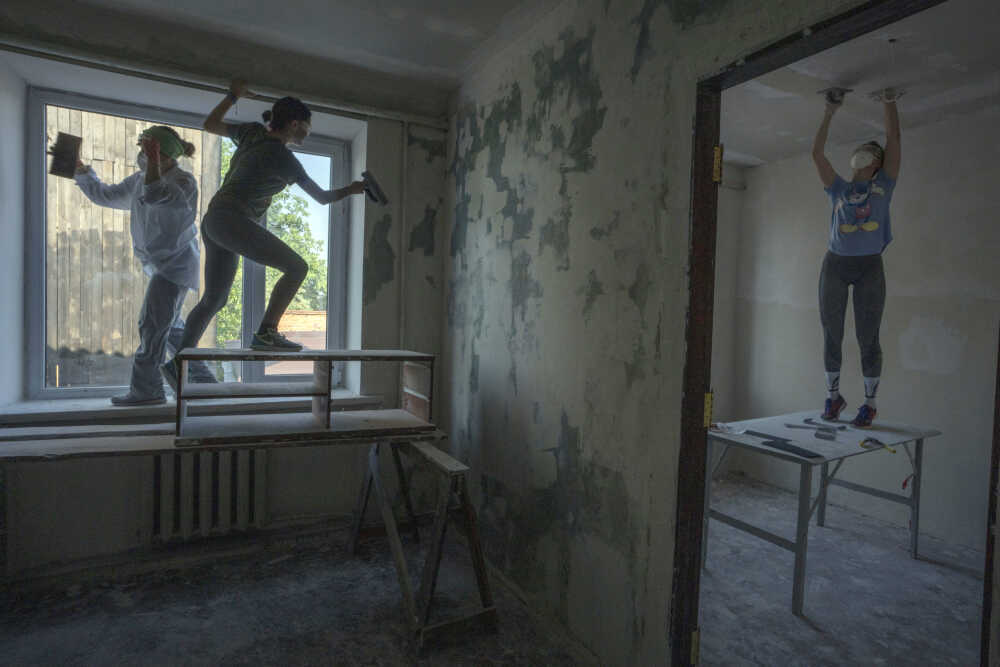 Women work to rebuild a fire department damaged by a Russian attack in Makarov, Kyiv, Ukraine, on Wednesday. In the first week of the war many of Makareev’s buildings were destroyed or partially damaged. Youth Volunteer Movement Building Ukraine Together, has helped rebuild damaged buildings in eastern Ukraine since 2014.

YAHIDNE, Ukraine – On the outskirts of a Ukrainian village stands the remains of a small school that was partially destroyed in the first week of the Russian invasion.

Surrounded by tall pine trees, the school’s broken windows give the impression of abandoned classrooms that students are unlikely to see again any time soon. It is one of the many buildings in Yahiden that were destroyed in the war.

But months after Russian troops retreated from the northern Chernihiv region, the village and others are slowly returning to life. Now people are repairing houses, and the sound of construction equipment fills the air. Volunteers from all over Ukraine and other countries are coming to help because there is so much to do before another winter arrives.

The workers include a copywriter and a cameraman who have been repairing the roof of the apartment block in front of the school for several days in the scorching sun.

Denis Ovcharenko, 31, and Denis Hushchik, 43, are from the capital, Kyiv. They have joined a volunteer building organization called Dobrobat, a name that combines “Dobro” or kindness with “bat” for the battalion. 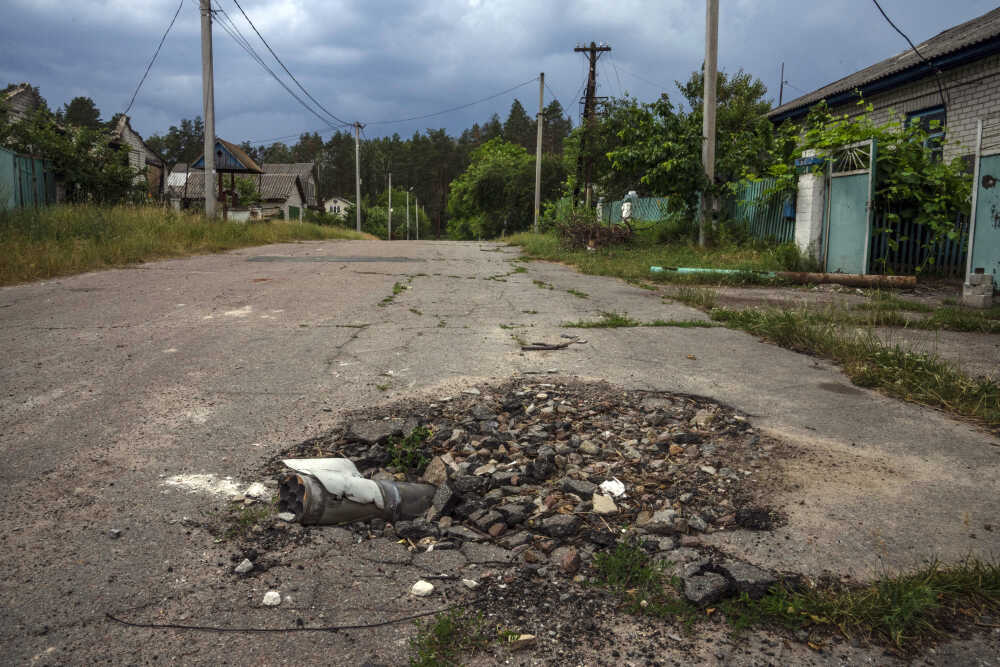 A portion of a mortar shell fell on a road in the village of Yahidne on Wednesday as civilians rebuilt their homes after being destroyed in a Russian attack in the northern Chernihiv region of Ukraine. A few months after the Russian troops retreated from Yahiden, the village is slowly regaining its life. People are repairing their houses, and a strong wind sometimes brings a bitter smell of ashes.

The men and 22 other volunteers helped their compatriots return to their homes as soon as possible.

“When the boys are protecting us, we work here,” Huschik said, referring to the soldiers in front.

No one in the village has yet planned to rebuild the school, which the Russians used as a foundation. The villagers prefer not to mention the place.

Most of the residents of Yahiden – about 400 – spent a month in the basement of the school, where they were held round the clock as human shields to protect them from attack by the Ukrainian army.

Only occasionally did Russian troops allow the villagers to climb up and enter the yard. But that was not enough. Ten people died in the dark, crowded basement. Survivors blame the lack of fresh air. 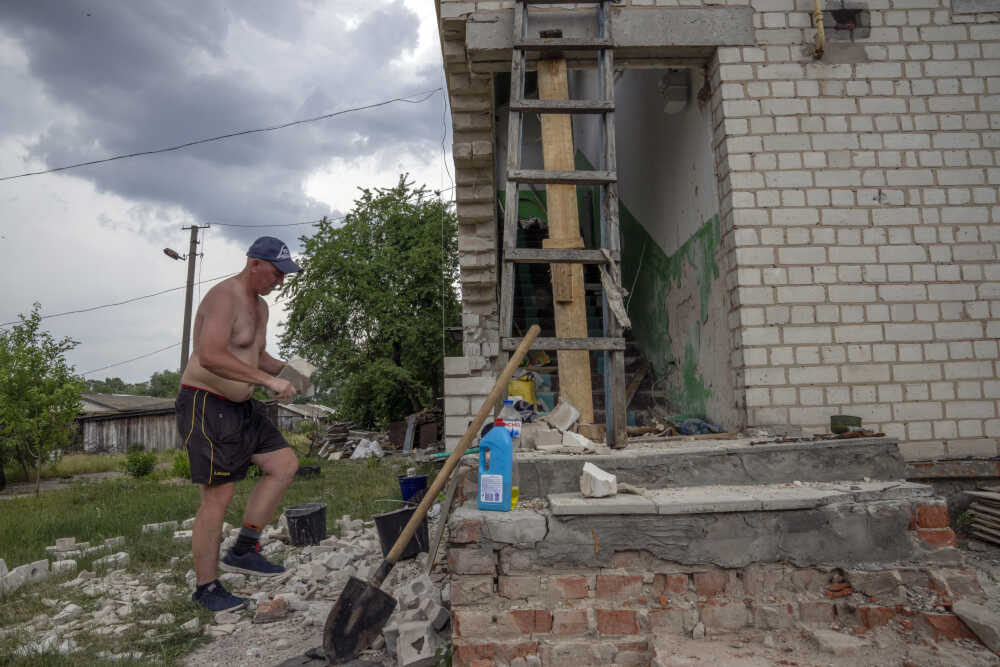 A man rebuilds his home on Wednesday after a Russian attack destroyed the village of Yahidan in Ukraine’s northern Chernihiv region.

The Russians left the village at the end of March.

The Dobrobat Group plans to repair the roofs of 21 homes next week. Volunteers include teachers, athletes and programmers. About 80% of them have no experience in construction.

Yahya is a village in northern Ukraine that has been invaded by Russia. And Dobrobat only responded to a team, sometimes drawing volunteers from outside Ukraine.

A father and son in the Czech Republic have decided to spend their annual family trip to Ukraine this year. Michael and Daniel Kahle see each other for just a few weeks each summer, while the boy studies in the United States.

Get the latest first thing of the day in the morning.

“We wanted to do something meaningful instead of just being a tourist,” said Daniel, 21.

This is how they came to the city of Makarov in the Kyiv region. In the first week of the war there were many buildings destroyed or damaged.

Father and son join the youth volunteer movement Create Ukraine Together, which has helped rebuild damaged buildings in eastern Ukraine since 2014. For several days, with young men from different parts of Ukraine, they worked on the reconstruction of the Makarov Fire Department, which was hit by an artillery shell on 12 March.

“It’s a long game. We can’t stop our lives, we can’t sit at home and wait for the war to end,” said Tetiana Simkovic, coordinator of Makareev’s volunteer team.

Many Ukrainians volunteer because they want to be helpful. But that’s not the only reason Yulia Kapustienko comes to the fire department every morning to put up walls. After spending two months in the besieged port city, the young woman left Mariupol at the end of April.

“I’ve seen corpses and burnt houses. Still, when I see a typical house, I automatically imagine what would happen after the rocket hit.” “It’s impossible to erase it from your mind. But at the same time, I try not to get stuck in the past, so it’s important for me to do something, to take responsibility.”

The 23-year-old is originally from Harlevka, in the eastern Donetsk region. His first experience in the armed profession was in 2014. After that, he cried for three years, unable to bear the loss of his own city.

This time he chose a different strategy.

“I know now that you have to do something,” Kapustienko said. “I don’t care what needs to be rebuilt. The main thing is to stay in Ukraine.”

Follow the AP coverage of the war at https://apnews.com/hub/russia-ukraine