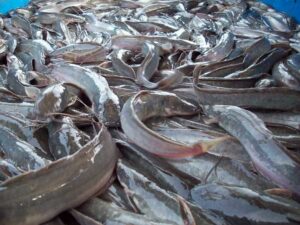 Catfish production in the eastern region increased by 276.92 percent from 2018 to 2021 after the Fisheries Commission supported producers through new technologies, extension services and training.

Mr Francis Barnes, the Eastern Regional Director of the Fisheries Commission, who disclosed this to the Ghana News Agency, said in 2018 the commission recorded about 60 catfish farmers who produced a combined total of 836.91 metric tonnes.

However, by 2021, the number of catfish farmers in the region has more than doubled to 128, increasing production to 3,151.91 metric tons.

Mr Barnes attributed the increased production levels to a series of activities and sustained support provided by the Commission to catfish farmers and those in general who have expressed an interest in catfish production.

Among the support measures, he listed provision of extension services, training in catfish hatchery management, promotion and use of circular tarpaulin tanks, which are more efficient to use than concrete tanks; and food systems for farmers.

He said catfish farmers were trained on how to treat three major diseases: water mold, a fungal disease, motility aeromonas, a bacterial disease and indigestion, a nutritional disease that affects fingerlings, and the commission after farmers reported unusual activity. It was discovered. their farm

Mr Burns suggested stocking 70 pieces of catfish fingerlings per 1000 liters of water to reduce high mortality as fish compete for oxygen in the water during rush hour.

He said the new system introduced has reduced the problems catfish farmers used to face, such as traveling long distances to get feed, stressing that “they used to travel to Accra and Akosombo regions to buy feed.”

However, the Fisheries Commission collaborates with Rana Fish Feed to supply the feed to the Commission so that catfish farmers can easily access it.

Despite the region’s significant gains in catfish production, Mr Barnes noted that the consumption market for catfish in the region was low as about 80 per cent of buyers came from Accra and other regions.

Again, he observed that some catfish hatchery operators chose to overdose fingerlings with antibiotics when they [farmers] Observe unusual behavior of any fish without veterinary advice.

“The use of unapproved antibiotics on catfish that behave abnormally will have negative health implications for consumers and the environment,” he said.

He also said the commission had discovered an unauthorized source of catfish hatcheries selling unauthorized fingerlings to farmers, resulting in lower catfish production.

As a result, he advises catfish farmers to avoid using antibiotics and to consult fish veterinarians if they see unusual fish behavior, and rely on the commission to direct them to hatcheries that can grow well.

Mr Barnes also urged the people of the eastern region to buy catfish from farmers there as the region was poised to increase catfish production and meet market demand.

The Fisheries Commission is the implementing agency of Ghana’s Ministry of Fisheries and Aquaculture Development, responsible for all fisheries development and management, including monitoring, regulation and surveillance, as well as assessment and compliance.