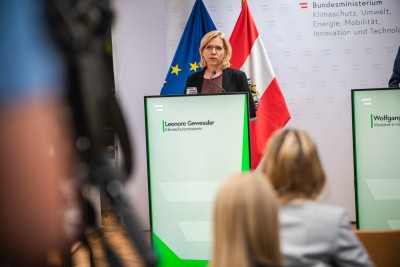 “If Austria wants to be at the forefront of climate protection, we have to do our part everywhere. It’s time for Austria to join the international coalition to reduce methane emissions,” Gewesler said. / Photo: © BMK / Cajetan Perwein

Climate Protection Minister Leonor Gewesler announced the entry after a meeting with US climate change envoy John Kerry, according to ORF. The meeting was held at the Global Clean Energy Action Forum in Pittsburgh, the ministry said, according to ORF.

The Methane Reduction Alliance was launched by the US and the EU in November 2021 as part of the COP 26 world climate conference in Glasgow. It is an initiative to reduce global methane emissions.

According to ORF, Gewessler is now hoping for further action on climate protection at the next world climate conference, COP27, in Egypt in November.

Methane is one of the most potent greenhouse gases, about 80 times more damaging to the climate than CO2. Among other things, it is released in agriculture during the digestive process of livestock and in the natural gas, oil and coal industries.

To join the Global Methane Commitment, countries commit to a collective goal of reducing methane emissions by 30 percent by 2030 from 2020 levels. To quantify methane emissions, best emission inventory methods are used, focusing in particular on large sources of emissions.